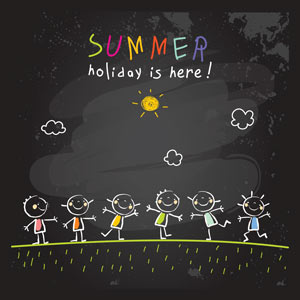 At The Academy, we know that children need a break from school. That’s why we design our summer daycare program to feel like a vacation from school. Our program during the regular school year is filled with fun, but it has a more academic feel. During the summer’s warm weather, we have more activities outside that allow children to play, explore, learn, and relax. Children are learning just as much in the summer, but they feel more like they are playing.

We also have Kindergarten Bootcamp for children getting ready to enroll in kindergarten the next school year. This not only prepares children for kindergarten, it gives them the “summer camp” experience.

When Did Summer Break Originate?

The summer break originated early in the 20th century. Previously, urban schools operated year-round, but school attendance was not mandatory. And so, students averaged only six months of attendance. This led to eliminate the summer quarter and cut the school year to 180 days. Additionally, at that time, physicians believed that children were too feeble for year-round instruction. And the spread of diseases in the summer in poorly ventilated schools was also a concern.

Check Out Our Summer Daycare Program

Now we know children aren’t too feeble for year-round instruction, and our schools are air-conditioned. But it’s just common sense that year after year of daycare with no break can become a grind. And that is why we at The Academy do everything we can to make our summer daycare program feel different.

The proof is in the pudding. Our students look forward to summer at The Academy. They love playing in the water and going down the giant water slide. Making mud pies is another favorite. And, of course, the children love nothing better than riding their tricycles, big wheels, and scooters in the playground. We invite you to come and see for yourself.

To make an enrollment inquiry or request more info click below.

The Academy currently has 12 preschool locations in Middle Tennessee.

Stay connected with us by following The Academy on social media.